we are shipping solution 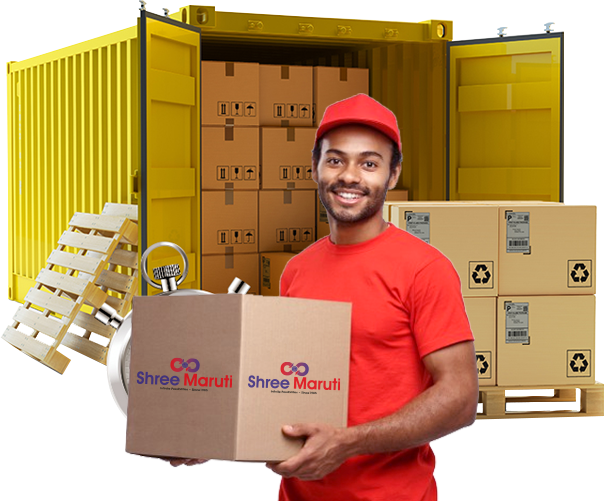 To create entrepreneurial ecosystem and great leaders for Growing India and to give major contribution towards developing logistic industry. We also focus in adopting a new technology and with that also generate employment opportunity equally.

Our mission is to offer most dependable, fast & technologically advanced Delivery services, that exceeds our user's expectations… Which they rave about every time they use our services. We shall always strive towards principal of Mutuality in relationship with our team, partners, vendors, society & environment

Shri Rambhai Mokariya, Chairman and Managing Director of the Company, is eminent for his visionary loom. His vision for the prospect has enabled the Company to accomplish a second-to-none position in the service field. Our service contracts with diverse banking institutions, which always persist on timely and proficient pick-up and delivery schedules, bear testimony to the trust. We enjoy between greatly professionalized financial institutions.

We are one of leader in Asia pacific for courier services, and integrated express package distribution company with high reliability and satisfactory ratio. We have the most extensive domestic network covering over 2600+ locations, and service more than 22 countries and territories worldwide through our group company, Shree Maruti Courier global brand name in fast and effective distribution services. 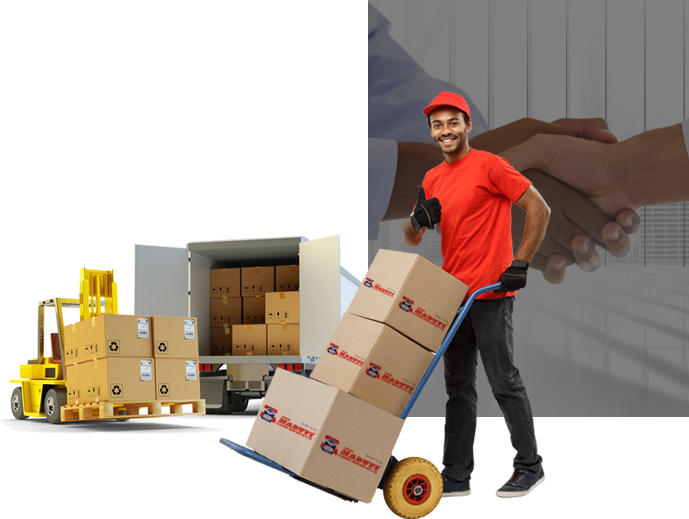 We take opportunity to state that; we are amongst India’s top 5 domestic courier companies having an ISO 9001:2008 Certificate with a admired Brand Name, Trust and Reliability.

The Company was started in a awfully humble manner in 1985 at Porbandar (The Birth Place of Mahatma Gandhi) by the farsighted entrepreneur Mr. Rambhai H. Mokariya.

Incorporated as a Small Scale Firm, transformed into Private Limited Company in 1987 and prolonged its business in other cities of Gujarat as well as India subsequently.

SHREE MARUTI COURIER SERVICE PVT. LTD., is a Private Limited Company incorporated under The Companies Act, 1956. The period of subsistence proves the rapidity of services and benevolence.

SHREE MARUTI COURIER SERVICE PVT. LTD. is one of the chief Courier Company in India consisting of nationwide network of Over 2284 Outlets and round the clock working at 20 Regional Offices expediently located all over India; In which there are more than 5,000 committed and passionate youngsters are working. The extensive network is fairly sufficient to satisfy customer’s mailing requirements.

We render our usual and supreme services to various Nationalized and Scheduled Banks, Government and Semi-Government sectors, Corporations and top graded National and Multinational Industrial Houses adequately up to their highest fulfillment and have built up a symbol of trust amongst them. The long list of customers says everything about our punctual service. More than 1,00,000 pleased customers are there; which is a fullproof substantiation of our brilliance in courier service.

We hand-out Satellite Points [the remote places] which are not served by any other Courier Company where our clientele necessitate dispatch frequently. We achieved the same by bearing in mind the requirements of our treasured consumers. No other courier agency can propose this type of exceptional and noble services.

Being a Gujarat-based Company, our utmost presence is in Gujarat as 650 Outlets are situated in Gujarat. Interiors and Micro interiors of Gujarat are also amicable. No one can cover Gujarat better than us.

It is for the information of general public that; we are the lawful owner of Trademark and logo “SHREE MARUTI COURIER SERVICE PVT. LTD.”

As per the order given by Honourable High Court, Gujarat on 28-7-2006 “Maruti Express Courier” was barred from using the Word “MARUTI” in its name. It will be considered a breach of law to use “MARUTI” or any similar word in their company’s name.

Our cherished customers are appealed to be awake of such Identical or deceptive name and inform us about any such company doing business with name like “Maruti”.

SMCSPL is commited to deliver courier services with pledge for superiority and timely services to all members of society.

Our company initiated its business with an preliminary capital with the name “Maruti Travel & Cargo” in four cities of Saurashtra region. Then they recognized as uniform distribution channel in all over India. TRUST & DEDICATION, only were its characteristics.

Pioneer of the company Rambhai Mokariya had willpower of consistency of services and happiness of customers, with the principle of hard-work and determination to mount the peaks of success, create a new path in the trade of courier services.

Company introduced Hub and spoke system by establishing seven Regional Offices as hub centers and by continual operations became one of the chief courier companies in Gujarat.

All the Regional Authorities came beneath one roof and the company was registered as Private Limited company under The Companies Registration Act, 1956, with the Registrar of Companies, Guajrat, in Ahmedabad on 12/11/1987.

We have established Satellite Centres at far-flung locations of Gujarat. This is the unusual service being offered by us in rural areas just to gratify customer’s need at trivial higher rate as the business volume in the said areas is pretty low; whereas expenses and time utilization are higher due to rare amenities of transportation. Currently, we are serving over 500 Satellite Points in Gujarat State.

Renewed service contract with IBA with higher rate with a view to make speedier operations.

On completion of 15 years, company arranged for Thanks Given festivity and invited to all its customers for their benefaction and support extensive to us and enabled us to achieve the pinnacle of victory. We also invited criticism from our customers to render superior services. Customers gave helpful response and suggested prolific rectifications. This indeed amplified our business relationship with customers. As per our policy, we always tempt suggestions / instructions from customers which assist us to bond with customers.

The company applied for registration for Trade Mark “MARUTI” with the Registrar of Trade Mark.

Some courier agencies started misuse of “Maruti” to misguide our clientele. We filed a suit against such agencies. Opened 62 new Channel Partner Offices in various states.

With diverse banking institutions, which always persist on timely and competent pick-up and delivery schedules, bear testimony to the trust we enjoyed amid highly professionalized financial institutions. We had nonstop six years (1993-1998) service contract with Indian Banks Association.

We take a pleasure to announce that Shree Maruti Courier Service P. Ltd. adds one more plume in its cap. The company achieved an ISO 9001:2008 Certificate for its internationally known quality service from DLIQ for the period of 23/04/2004 up to 23/04/2007. By this, we are the only one Domestic Courier company in Gujarat with a popular Brand Name, Trust & Reliability.

Started “International Service” from July-2005 considering the requirement of its large scale market.

Hon’ble High Court of Gujarat passed ruling in our favour that Shree Maruti Courier Service P. Ltd. is only the solitary owner having right to use word “MARUTI” in courier business. In the month of August-2006, Public Notice was also published in various news papers for general public at large.

SBI, Local Head Office, Ahmedabad, renewed contract for 2 years approving us as an official courier for all branches of Gujarat Circle.

Opened new outlets in Thane. At present, we do have more than 1300 outlets in India. This shows how large our network is !

Received Certificate of Registration of Trade Mark No. 863578 from Trade Marks Registry, Mumbai, for a period of 10 years.

Entered into Annual Service Contract with BOB for Western UP Zone.

15 new Outlets opened in Gujarat, Maharashtra, Delhi, Tamilnadu, M. P. & West Bengal. At present, we do have more than 1600 outlets in India. This shows how large our network is !

SBI, Local Head Office, Ahmedabad, renewed contract for 2 years approving us as an official courier for all branches of Gujarat Circle.

In FAST TRACK SERVICE SMS facility is started on 1/1/2009. in this facility FAST TRACK CUSTOMER gets SMS on delivery of consignment.

Now you can enjoy our presence in IMPHAL, NORTH EAST.

To be at the top of the allocation service through punctual, quick and reliable services with classy and upgraded technology, to meet and surpass the customer requirements.

Shri Rambhai Mokariya, Chairman and Managing Director of the Company, is eminent for his visionary loom. His vision for the prospect has enabled the Company to accomplish a second-to-none position in the service field. Our service contracts with diverse banking institutions, which always persist on timely and proficient pick-up and delivery schedules, bear testimony to the trust. We enjoy between greatly professionalized financial institutions. We had unremitting six years (1993-1998) of service contract with Indian Banks Association. Also we have entered into service contracts with State Bank of Saurashtra and Bank of Baroda.

After transforming the contract system of Bank; we have entered into annual service contract with individual banks with suitable service results. 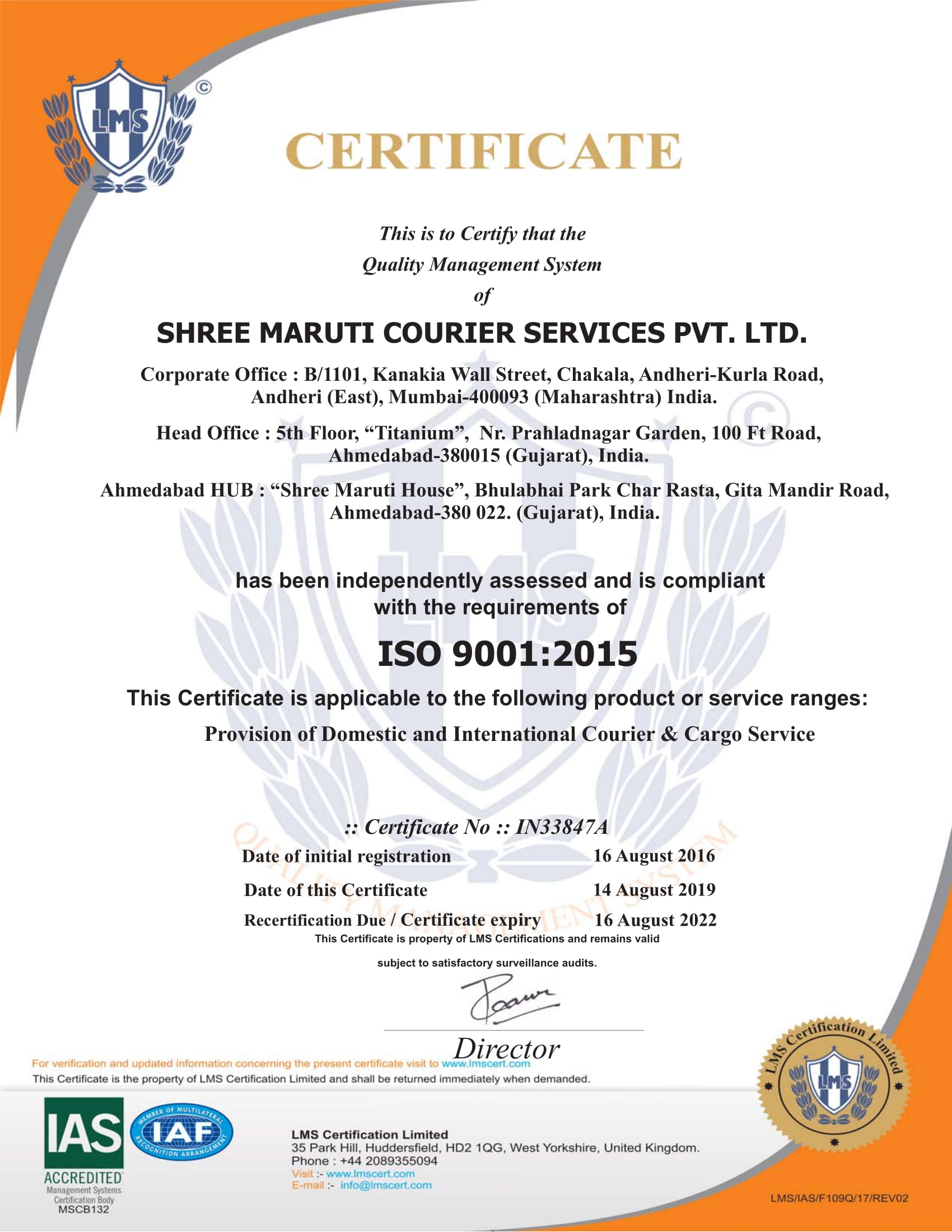 Shree Maruti Courier, an ISO 9001:2015 Certified Company by Survey (DNV) India and Accredited by UK, aims at shielding customer’s interest by emphasizing that a worth product can only be created through quality processes.Our CMD and Senior Managers head Shree Maruti Courier’s Quality Management and Processes Improvement groups. A Quality Executive is associated with each region pan India, to offer guidance on the use of Quality Management System and Implementation of Best Practices as well as to review the deliverables with the prime objective of Quality Assurance, Customer Satisfaction and making our Brand as Best Courier Service Providing Company.

These are consignments with no monetary value and are known as documents or general correspondence.

We adore our clients' admirations!

State Bank Of India considers Maruti Courier Services as one of the prominent courier services and providing efficient, smart and accurate services. They are one of the best services providers we have appointed. 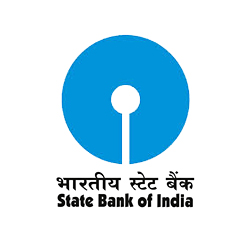 State Bank Of India
We are wishing best luck to Maruti Courier Services for their future projects and services with industries. They have worked for us for a long term of a period and we are pleased to express our satisfaction with their services. 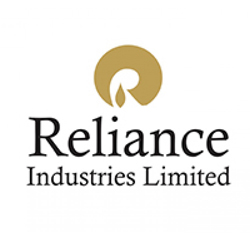 Reliance Corporate IT Park
Previous
Next

Sign up to receive updates, promotions, and sneak peaks of upcoming products. Plus 20% off your next order.

Sign up to receive updates, promotions, and sneak peaks of upcoming products. Plus 20% off your next order.